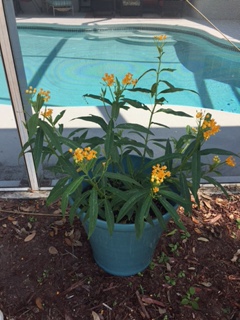 For years I’ve wanted a butterfly garden, but never took the steps to make it a reality.  This February I took the plunge, planting two milkweed host plants in my central Florida garden.

The butterflies came and laid eggs. I only know this because three weeks later, caterpillars appeared on March 8. The eggs had developed into larvae and metamorphosis had begun!

If some of you are like me, you may need a refresher on the growth process. Monarchs have four life stages: the egg, the larvae (caterpillar), the pupa (chrysalis), and the adult butterfly. Each generation of monarchs goes through these four stages during one year until it is time to start over again with the second generation laying eggs.

During February and March, hibernating monarch butterflies come out of hibernation to find a mate. They then migrate north and east in order to find a place to lay their eggs.

In March and April, the eggs are laid on milkweed plants. They hatch into baby caterpillars. It takes about four days for the eggs to hatch. Then the baby caterpillar doesn’t do much more than eat the milkweed in order to grow. After about two weeks, the caterpillar will be fully grown and find a place to attach itself so that it can start the process of metamorphosis. It will attach itself to a stem or a leaf using silk and transform into a chrysalis.

From the outside, the 10 days of the chrysalis phase seems to be a time when nothing is happening, but it is really a time of rapid change. Within the chrysalis, the old body parts of the caterpillar are undergoing a remarkable transformation to become the beautiful parts that make up the monarch butterfly that will emerge. When the monarch emerges, it flies away, feeding on flowers and just enjoying its short, two to six-week life. This first generation monarch butterfly will then die after laying eggs for generation number two.

Originally, there were three caterpillars, but then only two. It was during this time, an educator friend informed me that wasps were a predator. Sure enough, one day I spied a wasp buzzing around the potted milkweed. I immediately moved the pot inside the screened pool area to protect the caterpillars from certain death.

Day by day, I’d inspect the milkweed plant for growth of my two striped buddies. Voracious eaters, they doubled in size (kind of like teenagers).

One short week later on March 13, I discovered that my two buddies were missing! This caused me anxiety. I feared one of my cats had swatted it or worse, eaten them! But as I searched the vicinity of the plant, I noticed the caterpillars left the milkweed, crawled onto the screen and attached themselves to the aluminum post. They were both curled up in a J shape, but I didn’t know what that meant at the time.

Early the next morning, I spied two lime green chrysalis hanging from the screen enclosure where the caterpillars had been. What a delightful sight! My chrysalis watch began on March 14. It wasn’t until a week later that I spotted the gold line on the top as well as the 3 gold beads lower down. Each detail of their beauty reminds me that Creator God is indeed a God of minutia.  I’m captivated by chrysalis.

On Monday, March 27, I was like an impatient expectant mother, eagerly awaiting the birth of these babies. I checked them every few hours, hoping to not miss their debut. Tomorrow will be fourteen days, the amount of time www.monarchwatch.org says they should hatch. I wonder if they’re okay. I prayed over them then, hoping the unseasonal temperature dips into the forties did not harm their development.

A change was apparent Tuesday, March 28, when I noticed the pupa darkening, signaling that birth was imminent (the pupa showed the black of the wings). 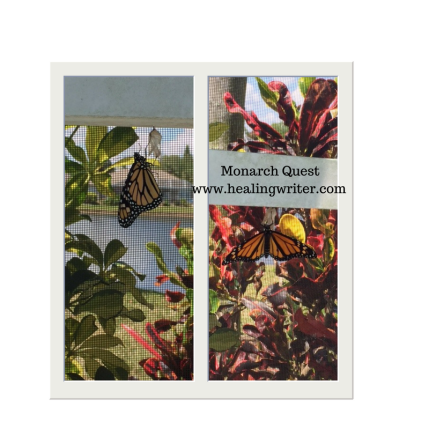 Then on Wed, March 29, I returned home from errands at 1:00 pm and there she hung! Folded up, her proboscis clinging to the now transparent cocoon. I stared in amazement. Minutes passed. She was still – then – she slowly opened, revealing her bright orange patterned cloak, white dots against black trimming the edges like a royal cape. I left her alone for 2 hours, then released her from our screened area into the wild so she could feed and do what she was created for – flutter in majestic beauty.

Brother, Where Art Thou?

For the next several days, I inspected Pupa #2 for signs of birth. The sibling chrysalis was 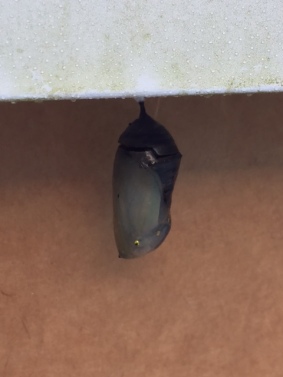 still hanging out, incubating. I waited, inspected, waited some more. But it never produced. After a week, I realized I had a stillborn on my hands. There would be no new life. (Cue up melancholy background melody).

What is my takeaway?

So many lessons it’s hard to choose, but one thing I learned was that pesticides and chemicals are deadly to developing pupa. You see, in my naiveté, I sprayed a light mist of bug spray to keep the wasps away. My efforts to help my little creatures actually poisoned it. How many times have we thought we were saying something helpful to someone, only to later realize in our spiritual naiveté, we were speaking death over them? “Death and life are in the power of the tongue and those who love it (life) will eat its fruit” (Proverbs 18:21 NKJV).

My second takeaway was a reminder that when God says we are new creations in Christ Jesus (1 Corinthians 5:17), we actually are fascinatingly transformed by His Spirit. This visual of the caterpillar morphing into an ethereal, winged, life-giving insect of beauty and grace resonated with me. Christians use this metaphor so often to explain salvation and the new birth to the point it can lose its impact (Therefore, if anyone is in Christ, the new creation has come: the old has gone, the new is here!). This spring, I discovered afresh the truth of this spiritual concept.

Our old nature has been crucified with Christ! We are monarchs to a heavenly Monarch! Thank you, Lord Jesus, for guiding my gardening and turning a butterfly quest into another God-adventure where You are speaking to me.

Thirdly, the research this project required educated me to the plight of monarch’s of which I was sadly unaware. Scientists observed the numbers of butterflies migrating to Mexico in 2014 was just 33 million, down from 60 million two years prior. Seems the overuse of pesticides in farming kills milkweed, coupled with deforestation in Mexico and US road construction destroying wild milkweed growing roadside has reduced monarch populations to a low of 33 million.  Crops have been genetically modified for resistance to the herbicide, Roundup which kills the seedlings of all surrounding perennials (like milkweed and wildflowers insects use for nectar) growing in and around agricultural fields.

But due to my tiny efforts, along with yours and other gardener hobbyists planting nectar flowers and tropical milkweed, the overwintering population of monarchs in Mexico increased in 2016: from 33 million to 200 million. Now THAT’s something nature lovers can shout about!

Raising monarch butterflies is an awe-inspiring experience. I’m hooked for life and hope you’re inspired to join the quest or continue on in your nature conservancy efforts. Thanks for patiently reading this far to share my encounter!

My readers and I would LOVE to hear your experience raising butterflies.