Imagine being kidnapped, ripped from your parents care, your homeland and all the familiar sights and sounds of your short life to be sold into slavery at age seven or eight. Transported on a transatlantic ship bearing human cargo to a new country, only to be sold again. Horrible, right? 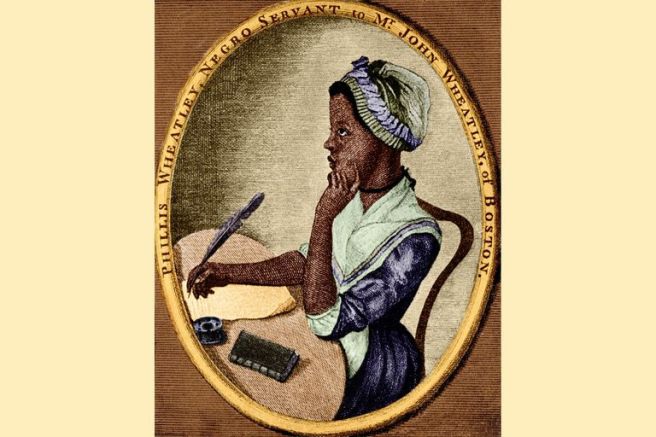 Phillis Wheatley from an illustration by Scipio Moorhead on the front page of her book of poems, later colorized. Culture Club/Hulton Archive/Getty Images

Fortune intervened for Phillis Wheatley, the first published, African-American female poet (1753-1784). Born in West Africa, she was sold by the tribal chief to a visiting trader who took her to Boston, then a British colony in Massachusetts in 1761 on a ship called The Phillis. Most of the Phillis’s human cargo was sold in the Caribbean. Only those unfit for work on the plantations—women, children, the elderly, sick, or disabled—continued on to Boston to be sold as domestic servants. Slavery was legal in all of the British colonies in the mid 18th century, but African slaves were fairly uncommon in New England.¹

She was re-sold to wealthy white merchant and tailor John Wheatley as a servant for his wife, Susanna. They named her Phillis after the ship that brought her and gave her their surname as a common custom of the colonial era.

Divine Intervention in Her Early Life

This is where her story departs custom. The Wheatley’s saw Phillis writing on a wall with chalk and rather than punish her, their 18 year-old daughter, Mary tutored Phillis to read and write. This family provided her an unprecedented education for an enslaved person and female of any race.

By age 12, Phillis was reading Greek and Latin classics and the Bible. By 13, she wrote her first poem, becoming a published author  when her poem “On Messrs. Hussey and Coffin” was printed in the Newport Mercury newspaper. Recognizing her literary ability, the Wheatley’s supported her education by assigning household labor to other slaves. She studied the works of Alexander Pope, John Milton, Homer’s epic poems The Iliad and The Odyssey, together with Greek poets Horace and Virgil which greatly influenced her own poetry.

Publication in the 18th Century Required Subscribers or Self Pay

In one sense, not much has changed in the publishing industry over 260 years – it costs money. According to Megan Mulder,

By 1772 Phillis had apparently amassed a considerable number of poems in manuscript, which had been widely circulated among the Wheatleys’ circle. Susanna (presumably with Phillis’s approval) decided to seek a wider audience by having a collection of 28 poems published. She advertised the Boston Censor magazine for subscribers for “A Collection of Poems, wrote at several times, and upon various occasions, by PHILLIS, a Negro Girl, from the strength of her own Genius.” The volume was to be an octavo of approximately 200 pages “handsomely bound and lettered.” The publisher, Ezekiel Russell, would begin printing copies as soon as 300 subscribers were committed to purchasing the book.

Publishing by subscription was a standard practice for an unknown author in the 18th century, especially in the colonies. Boston printers made their living from steady sellers like primers, almanacs, newspapers, and pamphlets. Then as now, a book of poetry was unlikely to turn much of a profit, so an aspiring author would be required to finance the publication herself.

Colonial printing in general was a very small enterprise compared to the large and established publishing industry in London. So it is not surprising that the majority of books for sale in the North American colonies were imported from England, nor that many American authors sought London publishers for their works. Even as Phillis waited for subscribers to sign up for her proposed Boston publication, she and the rest of the Wheatley’s were using their connections to make inquiries in England.²

Her masters son, Nathaniel brought her to London in 1773 at age 20 because Susanna believed Phillis would have a better chance of publishing her book of poems there for the reason stated above. She had an audience of significant members of British society. The publication of her poetry collection, Poems on Various Subjects, Religious and Moral was due to the help of Selina Hastings, the Countess of Huntingdon. While they were not able to meet in person, the Countess provided financing for publication.

Few authors today would have to undergo the scrutiny Wheatley endured. It was so rare to see an educated negro slave in colonial America that seventeen white men including the Governor and her master attested to the authenticity of her poetry, publishing this in the books forward:

As it has been repeatedly suggested to the Publisher, by persons who have seen the Manuscript, that Numbers would be ready to suspect they were not really the Writings of Phillis, he has procured the following Attestation, from the most respectable Characters in Boston, that none might have the least ground for disputing their Original.

We, whose names are under-written, do assure the World, that the Poems specified in the following Page were written by Phillis, a young Negro Girl, who was but a few years since, brought an uncultivated barbarian from Africa, and has ever since been, and now is, under the disadvantage of serving as a slave in a Family in this Town. She has been examined by some of the best Judges, and is thought qualified to write them.³

Her poetry book brought Phillis fame in both England and the American colonies. Figures such as George Washington and African-American poet Jupiter Hammon praised her work. Along with her poetry, she was able to express her thoughts, comments and concerns to others ( a freedom Americans now enjoy and often take for granted), exchanging letters with British philanthropist John Thornton, who discussed her poetry with John Newton. She moved to Providence, Rhode Island in 1775 after Susanna’s death. From here she sent George Washington a poem entitled, “To His Excellency George Washington”.  The following year, Washington invited her to visit him which she did. Thomas Paine republished her Washington poem in the Pennsylvania Gazette in April, 1776, keeping her name before the public.

Gaining Freedom in Her Later Life

Phillis lived a short life – a mere 31 years. Emancipated at age 20 after her poetry collection was published, she married John Peters, a free black grocer. They struggled with poverty and endured the death of two babies until his imprisonment for debt in 1784. She found work as a scullery maid for a short time until her death, December 5, 1784 due to illness.

While her life was brief, it was long enough to influence both British and American history with her art. She provides a peek into what American colonial life was like 260 years ago for black slaves and how providence intervened into her tiny world. Much can be said of the hardships and prejudice she suffered, but my focus today is on her art, her writing, the role of divine providence bringing her divine connections and financing for publication so that her words were heard. Of all the wealthy Boston families, why did John Wheatley purchase her? The education the Wheatley’s provided brought her literary gift forward.

Vincent Carretta, a Professor of English at the University of Maryland, specializing in eighteenth-century transatlantic English-speaking authors of African descent, describes Wheatley as the mother of African-American literature.

Secondly, if God orchestrated Wheatley’s life in such as way as to turn her kidnapping into an opportunity for education that developed her literary gift, plus financing with networking so that her words were read globally, is He not the same God today? My weak writers heart finds hope in her story that God’s unseen hand is at work.

Finally, this writer offers a word to women of 2017: Please, do not take the widespread availability of education for granted! Phillis’s life demonstrates that society has not always recognized the value of the female contribution outside the home to academia, the arts or culture. May this look back help us value our freedom this Independence Day!